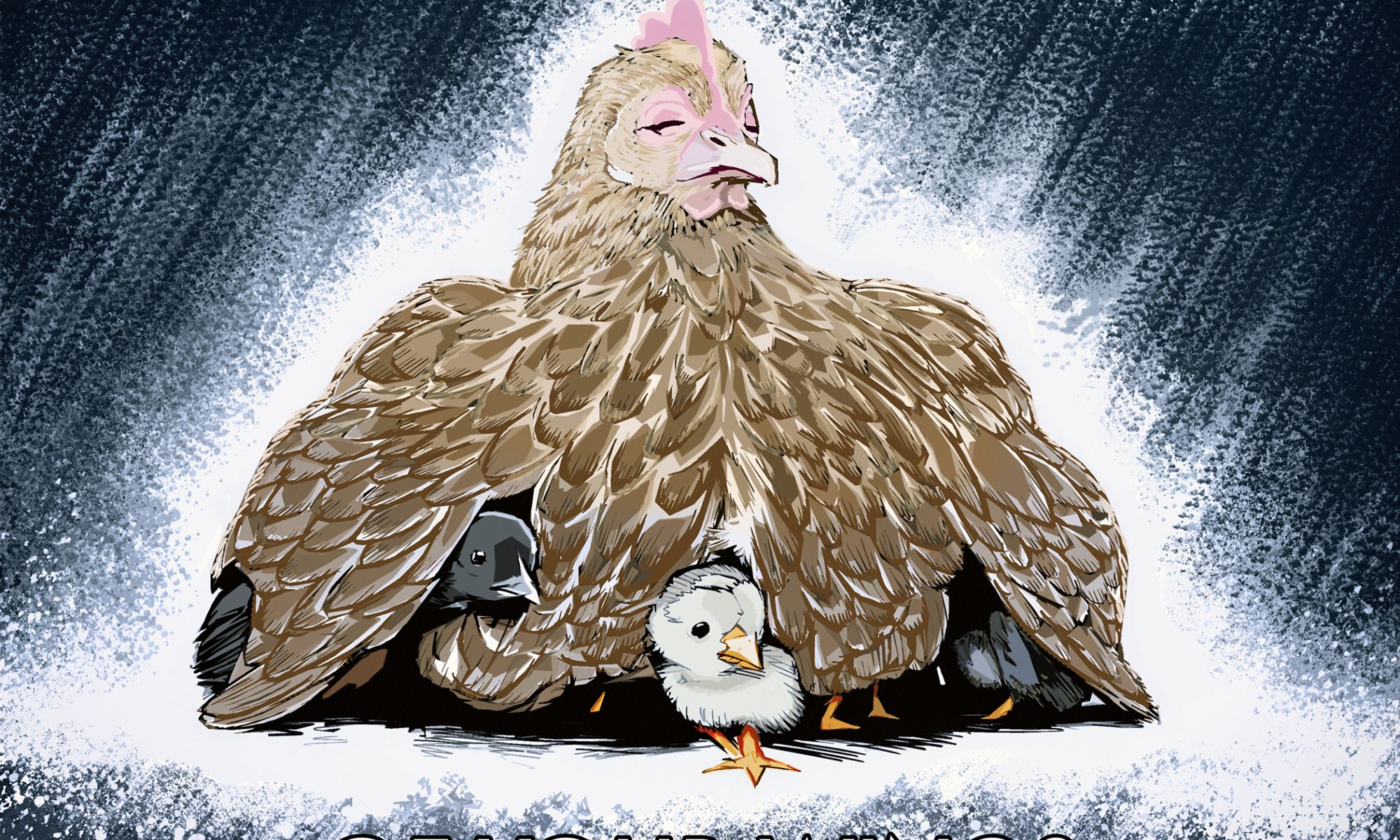 A series of cartoons/graphics focusing on the topic of faith.

[Book Cover]: Near to the Heart

My friend Richard Crocker is publishing a novel, Near to the Heart. We met at Dartmouth College where he served as college chaplain and, later on, dean of the Tucker Foundation. Apart from my fondness for Richard, I have always found him interesting. He is a man of wit, mystery, and depth. As a result, his writing project piqued my curiosity when it commenced many moons ago. The final product is a brilliantly compelling and oft-times humorous story about a young man’s journey to answer God’s call. Readers will find the novel’s themes timely. Richard’s protagonist, Ben Calhoun, navigates a bygone America upended by racial prejudice, war fatigue, and broken promises. Sound familiar?

A criticism leveled at this cartoon might focus on its failure to promote social distancing. That’s pretty on-target. Coronavirus seems to have taken Easter by the throat.

I don’t have a special affinity for chickens, either. The cartoons I consumed as a kid — from Chicken Little to Foghorn Leghorn — portrayed these creatures as irredeemably dim-witted. My childhood experiences hunting down colorful, candy-filled plastic eggs on Easter Sunday also did little to inject any real appreciation for the bird’s transcendent religious symbolism. I was chasing after a sugar high, and I pretty much approach Korean BBQ with the same enthusiasm today.

But what happens when Chicken Little is right and the sky is falling? This is a grim Easter. I don’t see the point of recounting ad nauseam why it’s grim. You already know why it’s grim. And if I did bloviate about the unfolding human tragedy or my struggles, I’d likely invite comparison, criticism, and scorn. That’s understandable. Because maybe everyone is struggling, but not to the same degree. A fair point about unfairness. The question posed remains unanswered, still.

Today’s events are not entirely unprecedented. No, I’m not evoking Pearl Harbor here (a fallacious and immoral comparison). Rather, plagues of all types have routinely beset humanity. Before continuing, let me attest that I’m not a professional authority, an expert. I’m not a doctor. I’m not a priest. I’m not an academic. Certain aspects of the term ‘dilettante’ ring true for me — for who I am, I guess. I’m also awfully aware of the inherent risks writing about, of all things, God and the Bible. Why?

Third, a natural incongruity exists between social media and faith, between incessant stimuli and profound silence. Unfortunately, for every single poignant depiction of faith on the internet, there’s a legion of hucksters and false prophets bringing open shame to the Almighty, seemingly unchallenged. I suppose this begs important questions about my intentions here. Am I just another charlatan riding on the Lord’s long coattails? Am I just another fool deluded by his imagination? This all shouldn’t deflect from the hopelessly saccharine quality of my art, of course, to which I’ll readily admit. Yet irony and flippancy seem hardly appropriate today, either.

I believe my responsibility is to honor God. Especially today. So if the work here fails to resonate, that’s entirely on me. I’ll own that. If you feel some measure of hope, then all glory goes to God.

Back to the point. Scripture is rife with plagues. Old and New Testament. The Ancient Egyptians experienced their fair share, notably in the time of Moses, when Pharaoh released the Hebrew population from captivity after bearing witness to an apocalyptic plague causing the sudden deaths of the nation’s firstborn sons (cattle included). This was a devastating attack on Egypt’s future, and this was a stunning disgrace for the royal cult. Only forewarned Jews who had marked their door with the blood of a sacrificed lamb escaped the calamity. Frequently omitted from sanitized versions of the exodus narrative, however, is the Almighty’s decision to “harden Pharaoh’s heart” before the ten plagues [Exodus 7], apparently prolonging Jewish captivity and Egyptian suffering to progressively reveal, through ever-increasing wonders, God’s existence. Sitting comfortably at a computer 3500 years later, I’m struck by two questions: Is God a showboat?, and is Pharaoh a victim?

Concerning the latter question, Pharaoh presumed his godhood. Remember his outrageously inhumane decree to have every Hebrew newborn boy drowned in the Nile as a form of population control. Pharaoh, like the children he ordered annihilated, had no say when God’s reckoning finally arrived. Quite the blow to Pharaoh’s ego. There’s a darker lesson here about family lineage, too. As far as I can surmise, the Egyptian firstborns had no direct part to play in the atrocities committed earlier, and their deaths appear entirely unjustified. However, Pharaoh could not have had succeeded in his mass-slaughter —  just one of many horrifying episodes sustaining a cruel and decadent Egyptian system of oppression — by working alone. A recurring theme in the Bible is just how often the sins of the parents fall upon their children. As Joseph Wittreich dryly noted, “History doesn’t repeat itself, but it does rhyme.”

Concerning the former question, God is not a dancing monkey. The Creator does not exist to amuse the creation. Nevertheless, the demand for signs from God is a recurring motif throughout all of Scripture since the type of relationship humanity invariably seeks with the divine is transactional. A social contract of sorts. The “give” and the “get.” Biblical characters will promise to believe in God in return for a sign of the Almighty’s existence; however, when miracles breaking the laws of nature manifest, they are easily forgotten when self-interest comes to the fore. Remember the prophet Aaron, who, after having had experienced God’s majesty on the summit of Mount Sinai along with his brother, Moses [Exodus 24], returned shortly afterward to the Israelite tribes camped at the mountain’s base and not only condoned the building of a golden calf but helped with its planning [Exodus 32]. Wow. Was God’s presence so underwhelming? Were the Hebrews’ grumblings so persuasive? Or is this a darkly humorous indictment of humanity’s impatience, fear, and short attention span? Aaron yielded to superstition and magic, to glittery things that mollify our spirit like a baby’s rattle and ensnare our intellect like a hungry vice.

When Moses came down from Mount Sinai to deliver God’s commandments — rules that would spur the development of civilizations for millenniums to come — what did he hear and see? He heard echoes of the Israelite experience in Egypt. He saw Hebrew hucksters imitating Egyptian sorcerers. So much for the “give” and the “get.” Were those ten plagues all for naught? A violent purge quickly followed and a priestly class, the Levites, was hastily established. But the damage was done. There was a taint now, one that was unmistakably human. Resentment against God built despite myriad miracles, including the gift of manna and water pouring forth from rock. Even Moses suffered a severe misstep when he stood triumphantly before the Israelites and failed to acknowledge God for the performance of a miracle, thereby directing Hebrew gratitude in the wrong direction — Moses himself.

I can appreciate how someone might argue there is something meaningless and tragicomic about this whole enterprise. Forty years in the wilderness and not one member over age twenty of the generation departing Egypt — save Caleb and Joshua — arrived in Canaan, the promised land. And this generation’s heroic faith at the outset gave way to a distant generation’s complete dissolution in the end. Sin and corruption, like an insidious weed, grew in the garden of Canaan despite the efforts of prophets and reformers, heroes and heroines. From Samuel to David to Elijah to Jonah to Isaiah to Esther to Naomi and Ruth. The list of inspiring figures is extensive. Because of forces without and within, however, a great civilization fell not just once, but twice [Babylonian Exile and the Siege of Jerusalem in 70 AD]. These are God’s “chosen people,” God’s “kingdom of priests.” Perhaps our facades crumble more quickly amid a plague, as Pharaoh experienced.  Nevertheless, a common destiny awaits us all, nations and people alike: death. The greatest plague. A birthright passed down to all of Adam and Eve’s descendants. Death. Inescapable and final.

Why does God even permit evil to exist in the first place? Ah, the theodicy dilemma. The Book of Job answers that question better than I ever could. Heavy fodder for a future cartoon, perhaps.

Back to chickens. Or, more specifically, hens.

“…how often I have longed to gather your children together, as a hen gathers her chicks under her wings, and you were not willing.”

Jesus compared himself to a hen — the “dim-witted” animal I referred to earlier — when speaking to erudite Pharisees. His lamentation occurred only days before excruciating torture and humiliating execution, and echoed a line from the Old Testament, Proverbs 7:2, that resonates with me today; so much so, in fact, that I include a variation of it in the cartoon above: “Keep me in the shadow of your wing.” At the time, Jesus was fully aware of the plague on the horizon, and, as evidenced by his prayers at Gethsemane, felt profound fear. Like all of us would. Yet Christ obeyed God’s command to the end. Unlike the Hebrew tribes lost in the wilderness. Unlike myself, with my daily stumbles.

Another meaningful juxtaposition is present here. Pharaoh coveted godhood and was brought low. In contrast, Jesus was raised up because he “did not consider equality with God something to be used to his own advantage; rather, he made himself nothing by taking the very nature of a servant.”  Servant leadership isn’t exclusive to Christ, of course. The hen doesn’t come before the egg.

The Book of Ecclesiastes affirms “there is nothing new under the sun.” As alluded to earlier, echoes of the Old Testament resound prominently throughout the Gospels. Like Moses, Jesus escaped a genocidal order at birth. Like Elijah, Jesus performed miraculous healings. Like David, Jesus was betrayed by a member of the “family.” On and on.

Echoes of the forces responsible for Christ’s death likewise reverberate today. Hysteria. Tribalism. Scapegoating. Like a rooster’s crow across time.

Yet I believe something new — indeed, something promised — occurred with Christ. Conceived without sin, this Mother Hen delivered a new egg into this world. Christ’s resurrection realized a new hope of everlasting life, his torture and death tantamount to birth pangs. Whereas Pharaoh oppressed the human body, Christ liberated the human spirit. Whereas the Israelites, righteous and unrighteous alike, returned to Abraham’s bosom at death, Christ’s sacrifice redeemed man’s original sin, thereby laying a path to the Almighty. The right direction. Back Home.

I delight in the victory of my Savior Jesus Christ. I delight in the Mother Hen who laid a new egg, one that fulfilled the promises of the past by breaking the chains of death and paving the way back home, back to that most excellent halcyon nest free from coronavirus, from all plagues — least to the greatest.

At the end of writing this note, I learned dilettante, a modern pejorative, actually derives from dilettare ‘to delight.’ How cool is that?